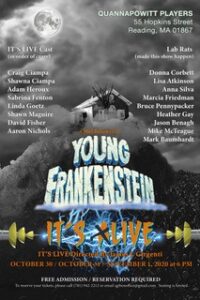 YOUNG FRANKENSTEIN is screened by special arrangement with CRITERION PICTURES US and is protected by the copyright (U.S. Copyright Act, Title 17, Sections 101 and 106). Quannapowitt Players, Inc. is a member of the Eastern Massachusetts Association of Community Theatres (EMACT), the American Association of Community Theatres Alliance of Artists & Producers (AACT), Stage Source, New England Theatre Conference (NETC) and ARTS Reading.

Craig Ciampa (Dr. Frederick Frankenstein) Craig’s past credits at QP include: Of Mice and Men (Lenny), Frankenstein (Dr. Helstrom), Dracula (Renfield). Other credits include Pillowman (Katurian), Good People (Mike), The Lyons (Curtis), Ideation (Ted) at Hovey Players, Silent Sky (Peter), Sherlock Holmes (Larabee) at Vokes Players, Stop Kiss (George) at Acme Theater, and Oleanna (John), Glengarry Glen Ross (Aranow) and To Kill a Mockingbird (Sheriff Tate) at The Umbrella. Shawna Ciampa (Elizabeth) Previous credits at QP: Criminal Hearts (Bo). Other credits include Silent Sky at Vokes Players, Stop Kiss (Callie), Home Games (Mertle Mae), The Champagne Charlie Stakes (Mary) at Acme Theatre, Violet (Violet), I Love You Because (Marcy) at F.U.D.G.E. Theatre Company, The Memory of Water (Catherine) at Way Theatre Artists, Evita (Eva Peron), Les Miserables (Fantine) at ActorSingers, A Streetcar Named Desire (Stella), Proof (Catherine) at Nashua Theatre Guild, The Superheroine Monologues (Wonder Woman) at Company One/Phoenix Theatre Artists and Rabbit Hole (Izzy), Disgraced (Emily) at The Umbrella. Sabrina Fenton (Inga) Sabrina is thrilled to be appearing in this very special and spooky QP production! She has been involved in all aspects of theatre, film, television, and modeling since the age of six. You may have seen her, previously on the QP stage, as Jackie in Mauritius (DASH Best Actress Nomination). Meredith in 5 Women Wearing The Same Dress (EMACT Best Actress Nomination), Vicki in Hide And Seek (DASH Best Supporting Actress Nomination), Miss Poppenghul in Moonlight & Magnolias (DASH Best Supporting Actress Winner), and Louise in The Underpants. When not performing, Sabrina can most likely be found frolicking in the woods with dogs, sipping good whisky and finding joy with dear friends around a firepit, or ‘expotitioning’ with her husband/partner in crime, Jason, and their furry loves, Daisy and Gatsby. David Fisher (Monster) past acting credits at QP include Theo Maske in The Underpants and Philostrate in A Midsummer Night’s Dream. His previous directing credits at QP include The Unexpected Guest and Taking Steps. QP set design credits include Hide & Seek, The Unexpected Guest, Comic Potential, and Taking Steps. He is also the director and a performer with the Acme Improv Company in Maynard, MA. James Girgenti (Live Cast Creator/Director) Is happy to be home at QP where he directed some of the hottest shows to hit our stage: Cabaret, Anything Goes, The Underpants, and Chicago. James also conceived, directed and choreographed N Tune, N Toon Too: Happily Ever After, Yule Tides, and his tribute to his mother, All You Need is Love. While rehearsing The Underpants, James looked at the cast and thought, “This would make the perfect cast for Young Frankenstein!” And so, 12 years later pulled the switch on Young Frankenstein: It’s Live and reached out to the cast and crew. And every last one of them said, “Yes!” Linda Goetz (Frau Blücher) Linda is excited to be back at QP after along hiatus. Some favorite theatre memories include Breaking the Code, Cabaret, Chicago, Anything Goes and The Underpants. Happy Halloween everyone! Adam Heroux (Igor) Adam has been performing in community theater for over fifteen years, but QP is easily his home away from home. A few past favorite roles on the stage include Bowers in Terra Nova (DASH Supporting Actor Nomination), Hannay in The 39 Steps (DASH Best Ensemble Nomination), David Selznick in Moonlight and Magnolias (DASH Best Play Nomination), and Stephen in the parking lot production of Slow Food. Shawn Maguire (Inspector Kemp) Shawn’s most recent QP credits include the roles of Slater in Funny Money, Richard in Moon Over Buffalo and Leo in The Porch. Shawn is also a regular player in Suburban Holidays including Detective Cawley in Auld Acquaintance (DASH Specialty Ensemble Nomination). Some of Shawn’s other QP credits include: Bottom/Pyramus in A Midsummer Night’s Dream and Richard Warwick (the dead man) in The Unexpected Guest, Candy in Of Mice and Men, Sidney Bruhl in Deathtrap, The Alligator in Duck Hunter Shoots Angel, Nethercott in Sordid Lives, Sam Nash/Jesse Kiplinger/Roy Hubley in Plaza Suite (DASH Nomination), Froggy Lesueur in, Mr. Kipps in The Woman in Black, Mickey/Lucien in Greetings!, Klinglehoff in The Underpants, Jonathan Brewster in Arsenic and Old Lace, Carter in Sympatico, Lucien in The Boys Next Door and Max in Lend Me A Tenor. Aaron Nichols (Blindman/Choreographer) Aaron danced with New York Theatre Ballet, Brooklyn Ballet, Staten Island Ballet, was featured in the International Choreographer’s Festival and has appeared in operas and television. He performed in Central Piedmont Summer Theater’s productions of Fiddler on the Roof, She Loves Me, Grand Hotel and in Theatre West Virginia’s The Hatfields and McCoys, Honey in the Rock and The Wizard of Oz. Special thanks to Alan Johnson the Choreographer behind Young Frankenstein’s Puttin’ on the Ritz. QUANNAPOWITT PLAYERS BOARD OF DIRECTORS J. Mark Baumhardt – President, Ron Wackowski – Vice President, Phyllis Uloth – Secretary, Brian Sensale – Treasurer, Donna Corbett, Jenny Fielding, Heather Gay, Shawn Maguire – Directors at Large and Bruce Pennypacker – Past President Quannapowitt Players 55 Hopkins Street, Reading MA 01867 Box Office & Information 781.942.2212 or www.qptheater.com