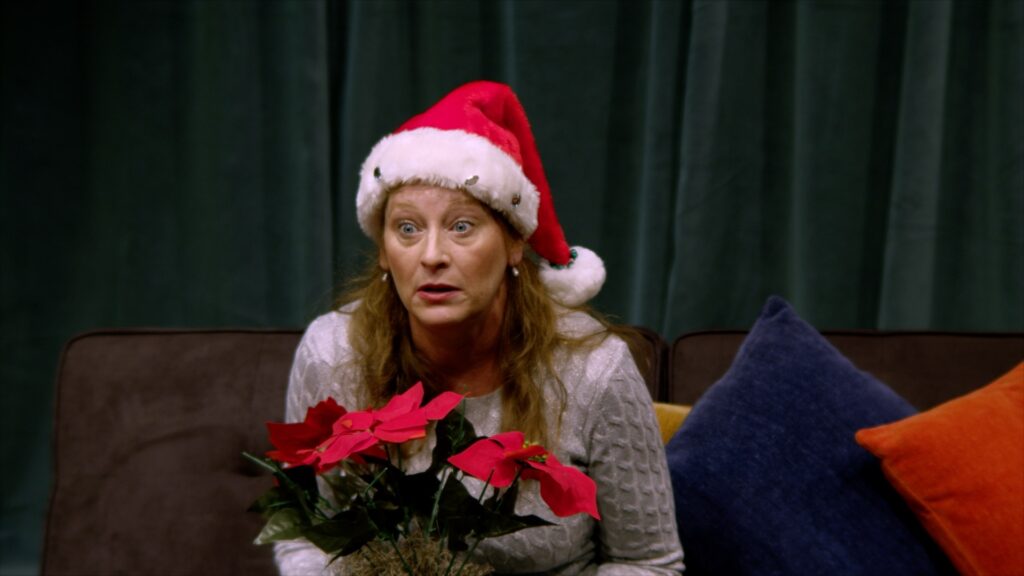 A Comet Hits the Earth by Patrick McCormick, Released December 11, 2020

The holiday season may look and feel a little different in this Covid year, but that doesn’t mean there aren’t creative ways to celebrate the holidays and still bring you Suburban Holidays! QP produced five all new short holiday plays by some of our favorite playwrights who generously let QP video tape the shows to put up on uTube as we cannot invite you back into the playhouse just yet.   Enjoy all five of these short holiday plays!

SEE ALL FIVES PLAYS IN VIDEO

PHOTO GALLERY OF THE PLAYS:

Keeping the Suburban Holidays tradition going has been a labor of love for so many of us at QP.  Number Nine is no exception as we moved the ‘venue’ to video in this COVID year!

How did SH begin you ask? It started with stage readings for new plays and QP’s first Playwright Festival in 2011. The idea was to highlight the many talented local playwrights we have.  It morphed  into focusing on playwrights doing new plays just for the holidays – any holiday as a FUNraiser.  This time with full production values of lights, costumes, set, etc. and actors learning the lines.  This brilliant idea came from Patrick Cleary who wrote the first play – Suburban Holidays in 2012!

In the nine seasons there have been a number of directors involved. Each year these folks solicit and read new plays,  and look at previous submissions to produce an entertaining night of theater for QP patrons.  They get playwright agreements, find lighting, sound and costume designers, figure out sets, and have been very fortunate to have original music written by Valerie Forgione.   And except for this year all the shows have been stage managed by Judy Forgione who we missed this year!

How did Number Nine became an entirely different FUNraiser you may ask?  No surprise the COVID pandemic made us look for alternatives to a theater full of patrons.  So the directors looked for short plays, with limited requirements and small casts this time that playwrights agreed we could video tape.  And the actors had to feel comfortable video taping inside on a modified QP stage with minimal number of staff well socially distanced.

Each director stage managed and found set, props or costume pieces as needed.  Bruce Pennypacker shed the light on the actors for the videographers who ran their four cameras – Iain Bason and Jon Sachs – for the five shows!   Jon also took on the daunting task of editing each show – which takes up to eight hours for each one. It is no small feat to produce such excellent videos!

As we cannot hand out a program to highlight all the folks that made Number Nine possible wanted to post a brief highlight and a very big thank you to everyone who made SH9 a reality!

THE CREW WHO BROUGHT YOU SUBURBAN HOLIDAYS NINE:

SH9 TEAM: These are the folks who read a lot of plays starting months before SH!  They choose the plays to perform, cast the actors, find the set pieces and props as well as direct the shows!  This year the choices had to be short and were determined by size of cast to keep social distancing, the simplicity of set and ability to tape the productions.  Nick Gould Producer, Donna Corbett Video Producer, Mary Ellen Macri, Chris Rose & Glenn Wakeley.

LIGHTS: Bruce Pennypacker who is always there to light our way!  He is also the lighting designer for Romeo & Juliet and so got to at least use the lighting plot this year.

ORIGINAL MUSIC: Valerie Forgione has created the music we have used for all the  Suburban Holiday shows plus so many more!

VIDEOGRAPHERS: Iain Bason and Jon Sachs or better known as boys with some incredible camera toys!   They taped all five shows at QP usually with four cameras placing them wherever needed for each show to capture all the different blocking. One show a night. An hour minimum for each taping to ensure everything was within the frame!

VIDEOS EDITOR: Jon Sachs edited all five of the SH9 shows. Not an easy task!  It took time – sometimes up to 8hrs for one show. It took a lot of patience and of course the same artistic skills he brings to all the photographs he takes of QP productions!  Jon always had a story or funny antidote to put the actors at ease too. He worked to get just what the directors envisioned for each play – just translating it to a video!

THE PLAYS and PLAYWRIGHTS:  We were very fortunate that we had received so many good plays in last couple of years. And we were exceptionally fortunate that playwrights for the chosen plays this year were very generous in allowing QP to tape the productions and put them up on uTube!

The Claus Are Out by Robin Doupé

Robin Doupé is a playwright from Long Island, NY. Her play Upset Over Nothing was performed in Suburban Holidays Six, and she is thrilled to be part of the festival again! Other works include The Connection and her one-act piece, Once Upon a Time’s Up, which was presented in the #metoo Play readings in New York. Robin is proud member of The Dramatists Guild.

Breaking the News by Keith Whalen

Keith’s short plays have won awards and been produced across the country.  Most recently, his play Wonderland won second place in Carrollwood Players’ “One-Act Weekend” production, and his comedy Coming to Town was awarded Runner-Up Winner in Theatre Odyssey’s Ten Minute Play Festival in Sarasota, FL.  His play Youth for Dark won Best Play in the “Tales from the Brookside” Festival in New Milford, CT, and was also a Finalist in the Aery Theatre Company’s 20/20 Play Festival in Garrison, NY.  His comedy Prisoner of Love won Best New Script and Audience Favorite in the Theatre Workshop of Owensboro’s Summer Shorts festival in Owensboro, KY, and was a selection in Silver Spring Stage’s One Act Festival in Silver Spring, MD.  Keith is a proud member of The Dramatists Guild.

A Comet Hits the Earth by Patrick McCormick

Writing credits include Upkeep and Two Dogs on a Beach, both for GI60,  an international, interactive, one-minute play festival, in 2017 and 2018 respectfully. Recent acting credits include Love’s Labour’s Lost, Witness for the Prosecution (Arlington Friends of the Drama), The Lesson (Or what it feels like to teach today) (Theatre on Fire / Boston Theatre Marathon XXI), and Gross Indecency: The Three Trials of Oscar Wilde (Longwood Players). When not acting, Patrick is the drama specialist for an after-school program. MFA in Acting: Brooklyn College.

Gift of the Matt-Guy by Ken Preuss

Ken Preuss is a writer and performer who became a teacher to guarantee an audience 5 days a week. Although his one-acts and short plays have been produced in festivals and schools in Australia, Canada, China, England, Germany, India, Ireland, Italy, Japan, Korea, Mexico, New Zealand, South Africa, and 48 of 50 States, Ken is rooted near Orlando, Florida with his wife, sons, and a few too many pets.

Death by Poinsettia by Dwayne Yancey

Featuring Kris Reynolds as Caroline and Jon Nuquist as Dwayne

Dwayne Yancey is a playwright and novelist in the Blue Ridge Mountains of Virginia. His work has been produced in 47 states, 6 provinces and 16 countries. His one-act “The Girl Who Made Emus Believe They Could Fly” was included in the 2019 Suburban Holidays show. He is online at dwayneyancey.com.