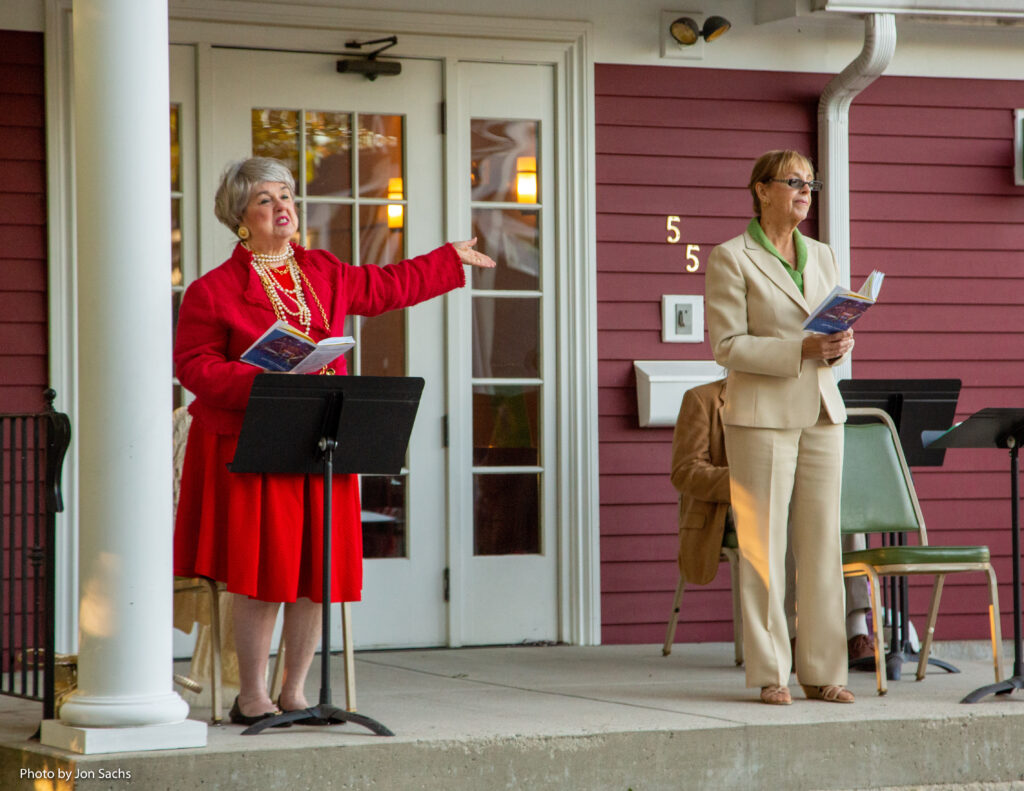 “Warmly funny and unexpectedly touching, ‘Deuce’ tells the story of retired tennis stars Leona Mullen and Midge Barker, who once made up a championship doubles team. When they meet again at the U.S. Open, the women—now at the end of their lives—find themselves trying to make sense of the professional partnership that brought them to the top of the sports world in their youth.”

Special Thanks to: Harrow’s Chicken Pies and Wally Arsenault for allowing us to park in his lot. Additional thanks to all the volunteers who help with ushing and parking day of production as well as: J. Mark Baumhardt, Marc Capizzi, Donna Corbett, Jenny Fielding,  Mike McTeague & Jon Sachs

PLACE:
Grandstands at the U.S. Open.

Harrow’s Chicken Pies and Wally Arsenault for allowing us to park in his lot. Additional thanks to all the volunteers who help with ushing and parking day of production as well as: J. Mark Baumhardt, Marc Capizzi, Donna Corbett, Jenny Fielding,  Mike McTeague & Jon Sachs

Karen Dervin (Director) Though Karen has not directed at QP, she has appeared on stage here multiple times. Most recent directing credits include 20th Century Blues at the Burlington Players and Little Old Ladies in Tennis Shoes at Acme Theater. A Lab Manager at MGH by day, Karen spends most of her non-working hours at a theater somewhere in eastern Massachusetts. Many thanks to Heather and the cast for being willing to create at a time when it is so needed.

David Dooks (Umpire) David is thrilled to be back with the Quannapowitt Players. Previous roles on this stage include Uncle Fred in Prelude to a Kiss, Flute/Thisbe in Midsummer Night’s Dream and Manny in IPO. He has been seen locally on stage in a variety of roles at a number of different theaters including the Concord Players, Burlington Players, Acme Theater, Vokes Theater, and Longwood Players. David received an undergraduate degree in Theater Arts from Roger Williams College and studied in London under James Roose-Evans.

Fred Robbins (Admirer) Fred has worked on many shows and in many theaters in the Boston area and New Hampshire. Open Door Theater (King Lear, Hamlet, Much Ado About Nothing), Acme (Moonlight in da Escanaba, Blackpool, Parish), Acadia Repertory Theater (Born Yesterday, Black Coffee, Relatively Speaking), Wheelock Family Theater (To Kill A Mockingbird, Inherit The Wind), New Repertory Theatre (The Crucible), Huntington Theatre (To Kill A Mockingbird US), Boston Theatre Works (Coyote on A Fence, Not About Nightingales) The Theater Cooperative, AFD, Burlington Players and Quannapowitt Players. I would like to thank Liz, my beautiful lady and wife, for her love, support and making so many things possible in my life.

Chantha Luk (Ryan Becker) Deuce is Chantha’s first QP production and he is thrilled to jump on board at such a time as this. Mr. Chantha teaches children’s music to preschoolers all around the Boston area. Whereas the Boston nightlife scene knows DJ Vanilla Rice, hosting karaoke nights at the Middle East Nightclub. Chantha is currently making a full transition back into theater and film work, just finishing a run as Duke Orsino in Twelfth Night at Dragonfly Theater. You may have also seen him in the past at Burlington in a number of roles including, but not limited to Carlos in Legally Blonde: The Musical and Elmer Sweeney in Night of January 16th.

Jennifer McCartney (Kelly Short) This is Jennifer’s second time performing at QP. Her first show here was Hide and Seek back in 2008. Jennifer’s most recent performance was Acme Theater’s Eat the Runt. Jennifer is so happy to be working again with Karen, and to have the opportunity to participate in live theater right now.

Kathleen Wackowski (Leona Mullen) Kathleen has been a QP member since 1980. She has enjoy being both an audience member and a performer on QP’s stage: She has appeared in QP’s productions of Jacques Bre; Chess; nTune; Musical Comedy Murders of 1940; and Suburban Holidays. Her one act play, A Month Too Short was performed as a QP theater workshop. With other local theater groups she has performed in such plays as: The Full Monty; August Osage County; Follies; The Glass Menagerie; La Cage aux Faux; Company; A Man of No Importance; Side by Side by Sondheim; Working and Curtains. One of her greatest honors was performing solo on the stages of Symphony Hall and Jordan Hall with Voices of Hope. Sadly, in real life her tennis game was never a match for Leona Mullens!