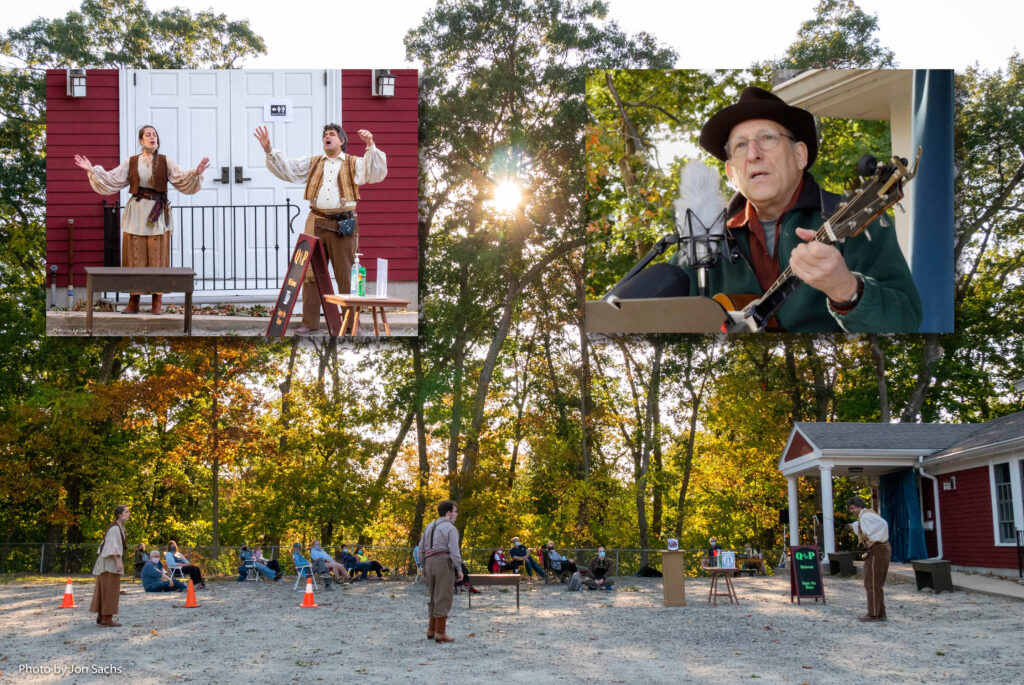 One Bard with his dulcet stylings known as Uncle Jon – aka Jon Sachs  – who writes and performs his songs when not photographing QP shows!And the cast members from QP’s Romeo and Juliet performing  a few iconic scenes that include a balcony, Queen Mab,  as well as a few swinging rapiers by that 16th century bard called Shakespeare!

SPECIAL THANKS TO: Harrow’s Chicken Pies and Wally Arsenault for allowing us to park in his lot. Additional thanks to all the volunteers who help with ushing and parking day of production as well as: J. Mark Baumhardt, Linda Burtt, Marc Capizzi, Donna Corbett, Jenny Fielding, Mike McTeague & Jon Sachs

Here is a 36 minute video where QP member Jon Sachs dons his Uncle Jon hat and sings 11 songs he wrote… If you are a glutton for further punishment you can visit his site at http://unclejonsongs.com/

We are very excited to be able to do a few scenes from Romeo & Juliet that was scheduled to open just as we had to shut down.   The show will go on when we can put it on, but for now we hope you can enjoy a brief teaser with our amazing cast!

And for those of you who attended Reading’s 375th PorchFest you will remember Jon Sachs singing on our porch.  We have brought him back by popular demand!

Known as Uncle Jon when he wears his songwriting hat, is a graphic designer, website maker, photographer and videographer. He forgot to figure out what he wanted to be when he grew up, so he does lots of things. Learn more about his professional work, his community theater and QP involvement, his work with the Burlington Sculpture Park, his infamous poison ivy website, and a bunch of other things at: www.jonsachscollected.com. From that site you can click over to whichever aspect of Jon for which you need more info… Oddly enough, QP awarded Jon a Life Membership even though his total onstage appearance amounted one 45 second walk through, but he has taken photos of nearly every play at QP for over 20 years, so just maybe he deserved the award.

TIME AND PLACE:  SOUTHWEST USA IN 1800’S ON THE BORDER OF MEXICO WHERE THE MONTAGUES REIGN & CALIFORNIA WHERE THE CAPULETS THRIVE

Harrow’s Chicken Pies and Wally Arsenault for allowing us to park in his lot. Additional thanks to all the volunteers who help with ushing and parking day of production as well as: J. Mark Baumhardt, Linda Burtt, Marc Capizzi, Donna Corbett, Jenny Fielding, Mike McTeague & Jon Sachs

IAIN BASON (PRINCE): Iain is no stranger to QP’s stage, having appeared in Dinner With Friends as Gabe, Much Ado About Nothing as Don Pedro, and as Oberon in A Midsummer Night’s Dream. He has also designed lights at QP for My Old Lady and Moon Over Buffalo. Favorite roles elsewhere include Septimus in Arcadia and Mike in Good People with Arlington Friends of the Drama, Malcom in Macbeth at Vokes Theatre, Eric in An Inspector Calls for Concord Players, and Orsino in Twelfth Night for Shakespeare Now.

MOIRA BEALE (TYBALT): Romeo & Juliet is Moira’s QP debut. Moira was last seen as Celia in Love/Sick at Acting Out, and has been in several Bard Brigade productions, most recently as Cornwall in King Lear.  A native of Maine, she was a teaching artist at Penobscot Theatre Company and media manager for Ten Bucks Theatre. Some favorite past roles include Sherry in Tigers Be Still for Ten Bucks, Toinette in The Imaginary Invalid for Bangor Community Theater, and Dr. Martha Livingston in Agnes of God for Some Theatre Company. Moira is a regular member of the Boston Troupe of the Murder Mystery Company.

LINDA BURTT (COSTUME DESIGNER/CONSTRUCTION): Now retired from Salem State, Linda has enjoyed being back at QP!  Favorite past QP designs have included her steampunk Dracula (EMACT Outstanding Costumes), Frankenstein 1930, Fools, Greetings!, Into the Woods, and Importance of Being Earnest. She also received the EMACT Outstanding Costumes award for Concord Player’s Drowsy Chaperone. She has great pride in the recent design for at AFD’s of Rosencrantz and Guildenstern are Dead. Linda’s next project is to step back onstage for Concord’s upcoming Steel Magnolias.

DONNA CORBETT (DIRECTOR/PRODUCER): A QP Life Member, Donna has taken on many roles at QP over the last four decades, from the administrative, to the creative. She has served as President, VP, Board of Directors, House and Ticket Manager as well as serving as a member of many committees and producing many shows. Her creative credits include directing, designing sets and lights, stage managing and properties. Donna’s recent directorial credits include Funny Money,  A Midsummer Night’s Dream, Suburban Holidays and The Curate Shakespeare’s As You Like It.  Donna has a number of nominations from NETC and EMACT that include Dracula (Multiple EMACT technical awards), Wonder of the World (NETC Best Director), The Dining Room (NETC Finalist), Hotel Paradiso, On The Razzle (NETC Best Production and Best Director winner),  Tom Foolery (NETC Finalist), Taming of the Shrew, Seascape, On The Verge, and Love Letters.  Donna has designed the sets for many of the shows she has directed at QP like Harvey, Loot, The American Clock and She Loves Me  as well as for others such as:  Prelude to a Kiss, Laura, Deathtrap, Duck Hunter Shoots Angel, Breaking The Code, Getting Away with Murder, Arsenic and Old Lace. Donna has also directed and/or designed sets at AFD, Burlington Players and Vokes.

ANDY LETAI (ROMEO): Andy is thrilled to make his QP debut at Romeo.  A long time Shakespeare enthusiast, he has loved bringing one of the bard’s most iconic characters to life.  Some of Andy’s favorite past roles include Malvolio in Twelfth Night for Barenaked Theatre Company,  the Gravedigger in Hamlet at Hamilton College Theater, and Genie of the Ring in Aladdin and the Wonderful Lamp with the Wheelock Family Theater.  Andy is also a writer, with short stories published in the Allegheny Review and Oakland Arts Review. His short play Revision has been performed by the Trinity Repertory Company. He can currently be found leading ghost tours with Ghosts and Gravestones in Boston.

LAURA LIBERGE (BENVOLIO): Audiences may recognize Laura from other QP productions such as Kenni in Becky’s New Car, Trudi in Comic Potential, Hermia in A Midsummer Night’s Dream, and Beth in Bake Sale in Suburban Holidays 2019. Favorite past roles include Ross in Macbeth, Gremia in The Taming of the Shrew, Holofernia in Love’s Labour’s Lost, and Portia in The Merchant of Venice. Laura holds a B.A. in Theatre/ English from Suffolk University and an M.A. in Theatre Performance from Mountview Academy in London. She currently owns and runs a north shore Shakespearean troupe called The Bard Brigade with her husband Nick Gould.

SARAH LOGSDON (LADY CAPULET): This is Sarah first QP production.  Sarah has a BFA in Theater Arts from the University of Mississippi and a Master of Social Work degree from Loyola University Chicago. She has been involved with theatre for most of her life and has spent most of the last 14 years performing, coaching, and teaching improv in Chicago. She’s particularly proud of her work as a therapist with the Improv for Anxiety program at Second City in Chicago.

AMANDA O’DONNELL (JULIET): Amanda is excited to return to the QP stage having appeared previously in Almost, Maine and Suburban Holidays V-VII.  She is playing in one of her favorite shows of all time, and playing one of her ultimate “bucket list” roles as Juliet! Recent favorites elsewhere include Kate in Pirates of Penzance (Yorick Ensemble), Viola in Twelfth Night (Walking Shadow Shakespeare Project), and the Page in Antigone (Flat Earth Theatre). Amanda is currently pursuing an MFA in Theatre Education at Emerson College while working as a full-time performer and educator.

BRIAN SENSALE (MERCUTIO): Brian was last seen on the QP stage as Mark Boxer in Taking Steps. His QP credits for QP’s annual Suburban Holidays festival include multiple roles like Bob in Bob the Cop and Wine in Liquid Love which won an EMACT Special Ensemble Award.  Some of Brian’s other favorite roles at QP include Demetrius in A Midsummer Night’s Dream, Julian in The Unexpected Guest, Amiens in The Curate Shakespeare’s As You Like It, Hal in Loot, and Leslie in It Runs in the Family.  Other favorite roles include David in The O’Connor Girls and Jim in Trading Post at Acme Theatre Company, as well as Stanley in One Man, Two Guvnor’s and Lucas in Laughter on the 23rd Floor with the Burlington Players. Offstage, Brian has served as QP’s treasurer for what feels like a lifetime.